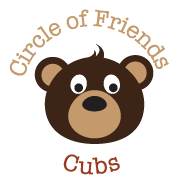 We spent the last two weeks wrapping up our Human Body unit. We read a great book called A Drop of Blood and learned how much blood is in our bodies, its
functions, its components, and how it is circulated. One unique feature of the book is that it incorporates real photographs into the cartoon-like illustrations. We
talked about red blood cells (carry oxygen), white blood cells (“eat” the bad germs), platelets (cause blood to become like glue to stop boo boos from bleeding),
and plasma (liquid that blood is in that helps it move around the body). The children had the opportunity to play with “buckets of blood.” The buckets contained red
water beads (red blood cells), white plastic golf balls (white blood cells), glass “blobs” (platelets), plastic worms (germs), and a bit of water (plasma). We could tell
by listening to the children as they played that they were processing and retaining what they learned. In addition to the buckets of blood, the children traced their
fists (that is the approximate size of the heart) and attached them to their skeletons. They also dictated and illustrated a page telling what their hearts are
full of. This was truly an interesting exercise, as the children are very literal and wanted to write/draw blood! We had to explain (many times) that we weren’t talking about the contents of their hearts “in real life,” but rather things that they love. There were some pretty funny moments while we all figured that out!

From the heart we moved to the lungs. We read What’s Inside Me? My Lungs and Your Lungs to learn about the location and function of the lungs. Mrs. Ward demonstrated how lungs inflate and deflate using two balloons. The children traced and cut out lung shapes and attached them to their skeletons. Then they put their lungs to good use and created paintings by blowing through straws. The results are hanging in the classroom.

A few years ago, a parent donated small plastic models of several organs: a heart, lungs, a stomach, a large intestine, a small intestine, kidneys, and a liver. They are similar to the plastic animals the children love to play with. We put the organs in a clear shoebox with some tinted rice and let the children play with them. Some buried the organs and then delighted in digging them up and identifying them; others hunted for the organs and tried to figure out what they were by using their sense of touch. If a child couldn’t identify an organ, I gave hints about it that involved drawing on the knowledge the children have gained about the human body. It was a great way to review what we have learned.

Our final Human Body unit component is an overview of the five senses. We read My Five Senses and Senses at the Seashore. The children made rose colored glasses and paper plate shakers and painted with jingle bells (a great way to combine Letter of the Week and the five senses!). We will spend the three day week upon returning after vacation finishing this part of the unit.

Our Letters of the Weeks the past two weeks were Ii and Jj. We brainstormed awesome lists and read The Icky Bug Book and Jamaica’s Find. The children played a counting/number  recognition/one-to-one correspondence game that involved identifying a numeral and then counting out the corresponding number of plastic insects onto a board that is shaped like a bug jar. The children used tweezers to pick up the bugs, which added a nice fine motor component to the game. The children also painted with colored ice cubes. Letter Jj activities included making beaded jewelry, baking cookies called Jumbles, and creating art with jello powder.